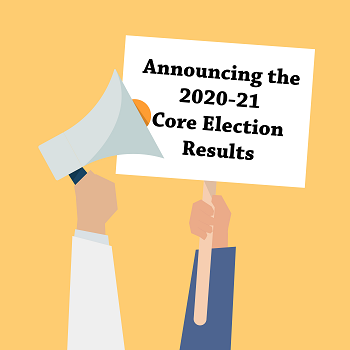 We are pleased to announce the results of the 2020-21 Core election.

Christopher J. Cronin, Associate University Librarian for Collections at Columbia University, has been elected as the first President of Core: Leadership, Infrastructure, Futures. His term will begin immediately and he will serve as President until June 30, 2021, and then as Past-President for one year.   He was elected from among the Presidents of the three former divisions that joined to form Core: Cronin, Association for Library Collections & Technical Services (ALCTS); Tyler Dzuba, Library Leadership and Management Association (LLAMA); Evviva Weinraub Lajoie, Library Information Technology Association (LITA). Dzuba and Weinraub Lajoie will remain on the Board to support Cronin in his Core responsibilities.

In discussing his vision for Core, Cronin said, “It is an honor and a privilege to be elected the first President of the new ALA Core Division. Core is taking shape at a critical time for its members and at an important juncture in the evolution of the Association as a whole. I look forward to working closely with Evviva, Tyler, and the rest of Core’s Board of Directors in setting the stage for a sustainable, productive, and inspiring new Division. Together, we will transform these three former divisions into a single unified professional home for all of its members.”

Elected as the first President-elect of Core is Lindsay Cronk, Head of Collection Strategies and Scholarly Communication at the University of Rochester. She will serve in that role until June 30, 2021, and then become Core President on July 1. Cronk was part of the Core Steering Committee and led the Communications Working Group, which managed member communications and town halls during the Spring, as the proposal to form Core was moving forward. She also co-authored Core’s Mission, Vision and Values.

Cronk said, “My sincere thanks to all of my Core Colleagues and particularly to Margaret Heller, my fellow candidate, for participating in Core’s first election. I am grateful for your confidence, and I look forward to swaggering together as we co-create ALA’s first truly library worker focused Division. I will not waste this opportunity, and I promise to lead a progressive agenda to ensure a Core and ALA that works for us. Libraries are radical, and so are you!”

This special election was held in ALA Connect, and members returned 556 ballots. In Spring 2021, Core will join the regular cycle of ALA elections to elect the next president-elect. The new Core Board will meet for the first time on November 5, 2020, and members are invited to attend. See the link under Find it Fast on the Core Connect homepage.

Congratulations to Christopher J. Cronin, Core President and Lindsay Cronk, Core President-elect on being elected to lead Core to the future! Thanks to all Core members for participating and making our first election a success!

Follow Core on social media and never miss an update.