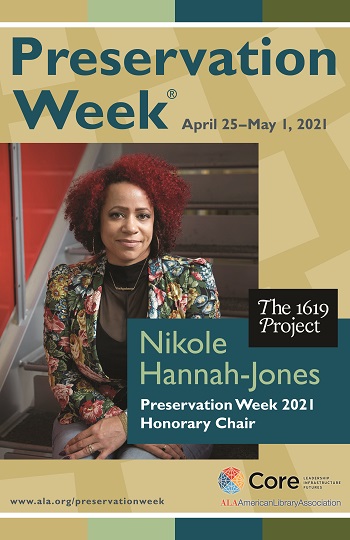 Pulitzer Prize-winning investigative reporter and New York Times Magazine journalist Nikole Hannah-Jones has been appointed as the honorary chair of Preservation Week 2021, celebrated April 25-May 1, 2021. As the creator of The New York Times’s landmark 1619 Project, Hannah-Jones examines slavery’s modern legacy, reframing the way we understand the history of slavery and the contributions made by Black Americans to this nation. Her essay, “Our Democracy’s founding ideals were false when they were written. Black Americans have fought to make them true,” was awarded the 2020 Pulitzer Prize.

In addition to developing the 1619 Project, Hannah-Jones has written extensively about school resegregation across the country and examined the decades-long failure of the federal government to enforce the landmark 1968 Fair Housing Act. In 2016, Nikole Hannah-Jones co-founded the Ida B. Wells Society for Investigative Reporting, a training and mentorship organization dedicated to increasing the ranks of investigative reporters of color.

The 2021 theme for Preservation Week is “Preserving Community Archives.” Community archives are organized by members of physical or self-identified communities—specifically those marginalized by traditional collecting institutions—and are focused on documenting and interpreting their own histories. As a journalist and founder of the 1619 Project, Hannah-Jones understands the significance of local and community archives collecting and preserving stories that counter dominant historical narratives. By exploring the history of civil rights and racial injustice in America, Nikole Hannah-Jones helps us examine and gain a better understanding of how these issues impact American society. Her work demonstrates the importance of cultivating and maintaining a community space of representation. Furthermore, her deep knowledge and understanding of American history, civil rights, and racial injustice make her the ideal candidate for representing Preservation Week and helping us recognize the importance of preserving community archives and the social justice power they represent.

You can also follow her on Twitter with @nhannahjones as she engages in discussions surrounding civil rights and social justice.