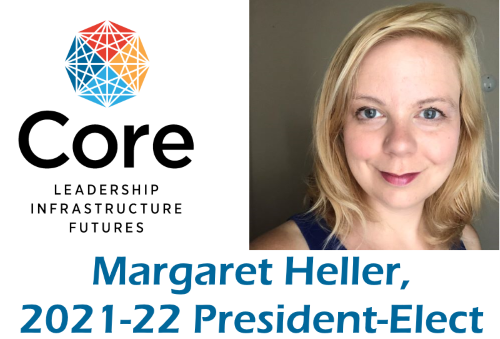 Margaret Heller, Digital Services Librarian at Loyola University Chicago, has been elected as the 2021-22 President-elect of Core: Leadership, Infrastructure, Futures, a division of the American Library Association (ALA). Her term will begin July 1, and she’ll serve in that role until July 1, 2022, when she’ll become President of Core. Heller’s fellow candidate for President-elect was Maurini Strub, Director of Performance & User Engagement at the University of Rochester (NY) River Campus Libraries.

In discussing her election, Heller said, “Thanks to the members of Core for giving me this opportunity to serve them as President-elect. Making Core a strong division that is dedicated to the needs of its members and improving the library profession as a whole has been my driving ambition over the past years. As Core has gotten started up during a time of unprecedented challenges, I have been inspired by the Core member leadership and staff response, and look forward to working with them, in particular the current President-elect, Lindsay Cronk. I want all members of Core to feel empowered personally and professionally and will do my best to make that happen.”

Heller currently serves on the leadership team of the Core Technology Section, and she previously served on several key committees developing Core as a new division. She also held several positions in the former Library Information Technology Association (LITA) division and was selected as an ALA Emerging Leader in 2013.

Thank you to all Core members who participated in the election!