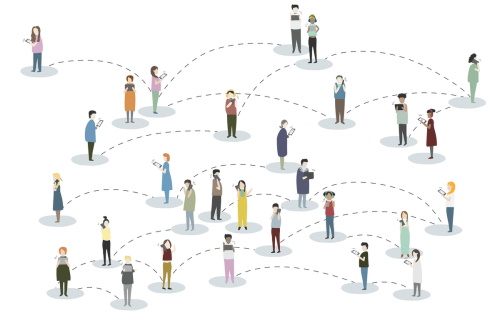 The Core New Members Interest Group will be publishing a series of posts, “Tips for New Librarians” featuring advice and interviews geared towards early career librarians. Please enjoy the first in our four part series!

Most of us know that networking can be a great way to find out about job opportunities when you’re on the market, but networking can also have numerous benefits even for librarians who’ve already secured a permanent position. Reaching out to other librarians can help you increase your job knowledge or identify a mentor. Plus, the more people who know you, the more opportunities you may find for committee appointments, scholarship collaborations, or even awards and recognitions.

An easy first step to networking is to join library associations (like Core!). But don’t just be another name on a list—get active. You will have many natural opportunities to network by volunteering on committees, participating in organization activities and meet-ups, or even by presenting at association conferences. Don’t just join national associations either—local organizations can be the best way to connect with others on a deeper level.

Who should you be connecting with, exactly? Potential networking partners can include your counterpart at another library, or maybe someone who has your dream job. If you prefer to start with a smaller group, there are numerous microassociations within organizations that might align with an aspect of your identity—be that as a cataloger, a knitter, or as a mom. You might also consider reaching out to a speaker you saw at a conference or an author whose article you really admired. You may be surprised to find that even librarians with “rock star” status in the field are still happy to connect with their fellow library workers.

Once you’ve identified a path to networking, it’s important to make connections. You might participate in a conference meet-up or dinner outing with a group or schedule a one-on-one coffee conversation with someone. If socializing isn’t a part of your networking goals, you could even consider asking someone to answer a list of your questions over video chat or email. Speaking of the digital world, #librarytwitter is one of the best places to meet librarians across the world and participate in discussions, trade recommendations, and—yes—network.

Finally, don’t let networking partnerships be fleeting. Keep in touch with networking partners over time—you never know when you might find it useful to bounce an idea off someone from another library or ask for advice on a career move. One way to build a long-lasting networking relationship is to seek out collaborations with librarians from other libraries. Look for coauthors or copresenters beyond the walls of your own library (your scholarship will be the richer for it!). Develop programming or initiatives with local partners in your city or state. You could even organize a networking event yourself with your new partners.

I interviewed my colleague Chelsee Dickson, who just ended a term on the planning committee for a local networking group in Atlanta, Georgia. Read below to see her advice for would-be networkers and for more resources to check out next!

[Ashley] How long have you been at Kennesaw State University?

[Chelsee] I’ve been in this position since April 2020.

Tell me about what kinds of networking activities you’ve participated in.

When I first began my career in librarianship, I attended a networking event for young professionals new to the field. It was hosted by the 2012 Atlanta Emerging Librarians Planning Committee, though I was unaware of this organization at the time. I’ve worked in many libraries throughout the Marietta/Cobb County area and have been able to seize opportunities to make connections with librarians and library workers along the way.

Tell me more about the Atlanta Emerging Librarians.

The Atlanta Emerging Librarians (AEL) is a standing committee of the Georgia Library Association’s New Members Round Table (NMRT). AEL strives to create connections between MLIS students, recent graduates, and new librarians in the metro-Atlanta area. The committee hosts a minimum of four events throughout the year that offer networking and professional development opportunities. This year, my fellow committee members and I hosted two virtual events: a workshop entitled “The Great Pivot: Getting Hired After COVID” in which attendees listened to experts speak about job hunting, writing the perfect resume, crafting cover letters, and matching their skills to a job ad. Our next event, “Grow with AEL,” focused on the newly constructed community garden at North Cobb Regional Library to showcase the library’s reach beyond their brick-and-mortar walls. Participants also received gardening advice, best practices when creating their own community garden, and tips on harvesting produce.

Is there anything unique about your networking experience?

In my current role, I’m responsible for hosting educational programming, namely for Open Access Week and Open Education Week. I’m constantly looking for potential presenters and speakers, and this requires me to go out on a limb and network with people that don’t even know I exist. I comb conferences, webinars, and listservs, hoping to happen upon librarians and educators that may be willing to share their time and expertise. The pandemic has made networking both easier and harder: while it’s true that I can hide behind the safety of my computer screen, there is something to be said about the loss of face-to-face human connection.

My educational programming events have been completely virtual, yet that also allows me to reach a larger audience and increase my potential networking pool. The speakers I’ve invited to KSU thus far have been gracious, patient, and full of knowledge. Since we’ve been unable to introduce ourselves in person, many of them have agreed to keep in touch and meet up with me at a conference some day!

How have you benefited from networking?

Networking can be difficult. I was very against traditional modes of networking when I began my career—in fact, it took everything in me to simply attend that first AEL mingle back in 2012. As I’ve gotten older, however, I understand the benefit of creating these connections. Not only are you establishing what will hopefully be the beginning of a mutually beneficial relationship, you’re learning about new perspectives and ideas that you may never have had access to if you’d decided to stay within your bubble. Yes, your new friend may provide you with a reference one day or give you a hot tip about an upcoming position, but they may also open your mind to different perspectives within your field and allow you the opportunity to join a conversation that you never knew was taking place. Networking expands your horizons both professionally and personally.

What is your advice for someone who is interested in networking, but on the introverted side?

I’m an introvert, and I can say with certainty that introversion can sometimes feel like a block or a hindrance when attempting to meet new people. I’ve found that the best way to overcome fears of leaving your comfort zone is to be purposeful in your networking. Introverts can feel drained when speaking with multiple new people at once, while extroverts flourish in this social arena, so choose your networking activities with care. If you connect with at least one person, you’ve done great. Online happy hours and networking activities can be stressful but know that others are probably feeling the same. I might also recommend reading The Introvert’s Complete Career Guide: From Landing a Job, to Surviving, Thriving, and Moving on Up by Jane Finkle—great for those looking for career guidance geared specifically to introverts. Bottom line: be yourself, be kind to yourself, and don’t feel you must become more extroverted just to make connections.

Finkle, J. (2019). The introvert’s complete career guide: From landing a job, to surviving, thriving, and moving on up. Weiser.