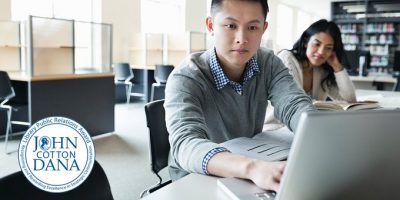 Eight libraries have won a John Cotton Dana (JCD) Award this year in recognition of their strategic communications efforts. The John Cotton Dana Awards provide up to eight grants for libraries that demonstrate outstanding library public relations. The award is managed by Core and EBSCO Information Services and consists of $10,000 grants from the H.W. Wilson Foundation.

Enoch Pratt Free Library
Going into the Summer of 2021, the Enoch Pratt Free Library faced an uphill battle to enroll participants in the annual summer reading program. The previous year, summer reading saw its lowest number of participants in decades — only 2,700 people signed up for the program. To appeal to a wider audience, Pratt staff looked outside of typical library program strategies to trending successful business models, and launched an innovative program, Summer in a Box, modeled after popular subscription box services. A coordinated marketing effort included targeted radio ads, social media, and even television commercials, combined with traditional media relations and digital strategies, resulted in the highest participation in the state — a six-fold increase of library cardholders from the previous year.

Niles-Maine District Library
The Niles-Maine District Library in Niles, Illinois, planned a campaign around their “Not So Haunted Open House” event in order to attract new patrons, reengage lapsed patrons, and welcome patrons back to the library post-pandemic. Through partnerships with businesses throughout the community, the library hosted a successful event with three times as many attendees as anticipated on a small budget.

Rochester Institute of Technology Library (RIT)
In the spring of 2021, Wallace Library, the sole library building at RIT, was scheduled for a major reconstruction project that would force closure of the building for two years. The decision was made to relocate the library to Ritter Ice Arena, the former home of RIT’s collegiate hockey teams. Introducing another disruptive change in the midst of the pandemic was not well received by RIT’s 19,000 students and 1,500 faculty — and many missed the initial announcement altogether, creating confusion and frustration. RIT Libraries developed an integrated campaign to increase the community’s awareness of the move and improve negative perceptions. The multifaceted effort engaged patrons with a naming contest that resulted in “Wallace on Ice” and led to an increased awareness of the benefits of the new space while increasing users.

Tacoma Public Library
The Tacoma Public Library in Tacoma, Washington, led a compelling fundraising campaign to fund and expand access to its Digital Media Labs — studios at the library utilized by filmmakers, musicians, audio engineers, students, podcasters and other creatives in their thriving arts community. The pandemic limited access to the labs and updated software and hardware were needed to continue serving patron’s interests, creativity and workforce development. The comprehensive campaign included patron emails, social media, videos and a “text to donate” feature. The campaign exceeded fundraising goal by $8,000 and a total of $22,000 was used to purchase Podcast Kits,. The campaign raised funding for new services and brought broader awareness to the library’s existing resources and introduced new patrons to the Digital Media Labs.

Watertown Free Public Library
The Watertown Free Public Library in Watertown, Massachusetts, promoted its first-ever Zine Fest and brand-new zine collection with their Copy and Resist! marketing campaign. It aimed to introduce young people to the library and empower the community to tell stories through zines. Creatively embracing the low-cost, antiestablishment, DIY zine aesthetic, the campaign reached tens of thousands of people with online marketing, earned media coverage in indie publications and The Boston Globe, and attracted hundreds to the Zine Fest. By selling popular pay-what-you-can tote bags, the library recouped all marketing expenses.

Wilmington Institute Free Library
The Wilmington Institute Free Library engaged in a multi-faceted campaign to generate new library users and revitalize the downtown area, where the library is located. Its successful re-branding campaign resulted in new library patrons and culminated with a free concert in the park adjacent to the library, bringing hundreds of people into the downtown area.

About John Cotton Dana
The JCD award is named after John Cotton Dana (1859–1929), the father of the modern library, who is credited with helping transition libraries from reading rooms to community centers. JCD submissions include strategic library communications campaigns from libraries of all types and sizes. In recognition of the achievement, JCD Award winners receive a cash development award from the H.W. Wilson Foundation. The John Cotton Dana Awards will be presented during an awards ceremony hosted by EBSCO Information Services held during this year’s ALA Annual Conference and will include winners from the previous two years.

Thank you to the H.W. Wilson Foundation for funding these awards and EBSCO Information Services for managing them with us.

Leadership and Stewarding the Talents of Others